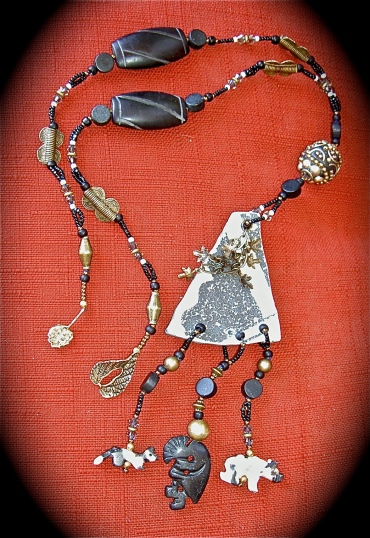 Description: Blackstone is a dark black rock. Black stone appears to be just what its name indicates – a stone dyed black or ink colored when manmade and when occurring naturally, it may be referred to as Black Jasper. While it mimics onyx, it is discernible by its lack of luster.

Location: It is presently impossible to narrow down the geographic location of this stone. Black stones have however been found around the world. Black stones are found in a variety of regions but most have definite properties, which are not comparable to any other stone.  Blackstone is however revered by pilgrims in Islam during the Tawaf ritual thus this region would be it’s most likely location.  The stones noted in this religious ceremony may actually refer to black jasper or an alternative black rock however blackstone is noted in several texts.   It is often thought that some of the blackstone was manmade.   If  manmade it was probably created in China.

History:  Omar ibn Al-Khattab” is noted to say “blackstone is a stone which can cause no harm or benefit.” Some blackstones have been polished smooth by the hands of millions of pilgrims, which visit the Kaaba , as part of the Tawaf ritual. Although blackstone has often been described as a meteorite, this hypothesis is still under consideration.

Folklore/Metaphysical; Black jasper is sometimes called “blackstone”.  Spiritualists are said to believe that it can protect against venomous snake and insect bites and offer general protection in times of conflict. The color “black” has traditionally been used for protection and is said to absorb negative energy.

Care: This stone requires that oils or perfumes be kept from its surface and soaking in water is not advisable. Clean and buff with soft polishing cloth.

The Author of this Blog, Nancy Uhlmann, is also the Owner and Head Designer for Absolutely Unique, LLC.